To editors: an incoherent ramble in your honour 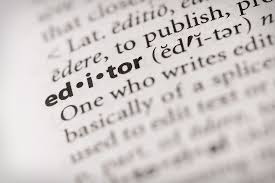 There's a very famous author out there who makes a lot more money than me, who, also famously, doesn't use an editor. And, as someone who's brain is currently mush thanks to spending the last few hours straight editing Darker Space, I get it. I do. Editing hurts my brain. But the simple fact that I can't remember my own name right now does not mean that I will ever think that editors are unnecessary.

Case in point: Darker Space. This is probably the most polished manuscript I've ever sent into an editor. God knows it should have been. I stared at it for long enough.

When you're writing a thing, and when you've been staring at it for what feels like your entire life, your brain does this thing where it sees what you think you wrote, even though it turns out what you wrote was total gibberish. But it's not just that stuff an editor will fix it. You editor will tell you when a plot point simply doesn't make sense, or when a character suddenly acts like a completely different person with a completely different motivation, or (thanks, Katriena!) when a character thinks back to a particularly traumatic scene that happened earlier on, and apparently forgets the other guy specifically wasn't wearing boots. That's the sort of clanger that I didn't spot, but you can bet every reader would have!

So yes, in some respects I hate editing. It's slow work, and it's not usually very exciting AND I'VE READ THIS S MANY TIMES I WANT TO PRINT IT OUT AND BURN IT UNDER THE LIGHT OF THE FULL MOON, but it's necessary. An editor is the person who takes your sometimes incomprehensible word vomit (and by your, of course I mean mine) and actually shapes it into a book.

Editors are geniuses. They know what comma splices are and everything, whereas I have to Google it every time.

Editors are magicians. They know what I'm saying even when, half the time, I wasn't that sure.

So yeah, I hope that I will never become the sort of writer who thinks she doesn't need an editor. If that ever happens, please slap me.

There are probably at least three typos and a million extraneous commas in this blog post. I will never not need an editor.

There has not been one book I've read, ever, that hasn't had a few errors in it. Self-pubbed, indie/small publishers, genre authors, mainstream authors with large publishing houses behind them - every single one has had a typo, nonsensical sentence or dropped word (usually there's all three). Even with multiple passes by the author, the beta readers, the editor and proofreader, something will slip by (even ones I've proofread ;-) ). I can't imagine why any anyone would think they're that amazing that they wouldn't need a good editor.

Oh, exactly! Errors still sometimes manage to make it through, however many people have a pass at the thing. Which is why I can't understand why someone would think they don't need an editor at all. I can only imagine how terrible my manuscripts would be if nobody else was looking at them at all!

So now that you've finished (or it least it sounds like you have) making the corrections suggested by your editor and sent it back off, can you give any idea of when we might be able to get our grubby little mitts on it? :)

As soon as I have a release date I'll be letting everyone know!

Usually the process is a couple of rounds of edits to make any changes that need to be made with the story itself, then it goes to line edits. At the same time someone is working on the cover art. I'd say tentatively maybe the whole process could take 2 months? But it all comes down to when the publisher decides to fit it into their release schedule. I'm not sure how that decision is made, to be honest.

Thanks for the info! Looking forward to it!