I just wanted everyone to be aware that I'm taking part in the Diverse Reader: LGBTQ Push Back Charity Giveaway.

Want to win a bunch of books?

It's easy. All you need to do is make adoration to an LGBTQ charity of your choice, then go to Diverse Reader and leave a comment stating you did so.

As it says over there:

Changing laws and attitudes takes time, and right now there are LGBT people in need who can’t afford to wait. The sooner we can help them, the better, and the more resources we have, the more help we can offer.


That’s why 224 authors, review bloggers, and publishers have got together to offer something wonderful: a reward for people who do a little bit to give back to charity. Instead of spending $5 on a book in the next two weeks, give that $5 to an LGBT charity of your choice, tell us about it in the comments, and go into the draw to win a book from one of our participating donors. And because it’s not all about money, if you can’t make a donation then please take a moment to share a charity’s links and tell us about that instead.

Three fundraisers have been set up to counter the hateful effects of Indiana’s SB 101. #Pizza4Equality is aiming to match the money raised by *that* pizza parlor, with all donations going to Cyndi Lauper’s True Colors Fund. Another fundraiser is aiming to raise $100,000 for Indiana Youth Group. Finally, Planting Peace is trying to raise $100,000 to provide beds for homeless LGBT people.


Please consider giving to one of these deserving fundraisers, or any other LGBT charity anywhere in the world. We’re not telling you where you should donate your time and money, only asking that you do. The smallest things can make the biggest difference, and together, we can do something incredible.


Hi! We’re Lisa Henry and M. Caspian, the authors of FALLOUT. We’re touring the web talking about our influences, our processes, anything we can think about actually, and even giving you guys a sneak peek or two! And what would a blog tour be without a contest? Check out the details at the bottom of the post to see what you can win!

So, the other day somebody asked me what I write. And I said Romance. But that’s not exactly true, is it? I write love stories, I think, but that’s often very different than romance. Love is an abiding connection between people, whether they’re still in your life or not. Romance is something you see on movies, with late night picnics on in rooftop gardens, and tea lights in mason jars. Love is bigger than a gesture. Love is dirty socks and remembering whose turn it is to put petrol in the car, and making room in your life for another person. Love is a smile, and a touch, and your elbows knocking together as you cook dinner in a tiny kitchen.

In FALLOUT, our two MCs, Jack and Bastian, are in love. They never doubt that. They do, though, sometimes doubt that they’ll be together forever. In the years they’ve been together, they’ve also drifted apart. Circumstances have changed. Bastian has a spinal injury that require constant monitoring. His quality of life isn’t the same as it was. And Jack is responsible for that injury. Both of them are secretly wondering what’s still holding their relationship together: love or guilt. Or maybe just habit.

I think that FALLOUT is very much a story about the strength of love, but it’s not romance. There’s nothing sweet about the nightmarish world that Jack and Bastian find themselves in when a natural disaster hits, but it’s love that stops either of them from giving up. It’s love that makes them do things--sometimes terrible things--that they never before thought possible. And it’s also love that engenders the spark of hope that keeps both of them fighting, even when circumstances force them apart.

High-school boyfriends Jack Haldane and Bastian Wade thought everything would be perfect once they reunited at college, putting disapproving parents and small-town attitudes firmly in the past. Now Jack’s on track for a PhD scholarship and a career as a researcher, and Bastian . . . well, living inside a broken body and trailing along in Jack’s shadow didn’t feature in his lofty teenage ambitions. A weekend camping trip back home offers a chance for them to reconnect, but an ugly confrontation with the local motorcycle gang is only the start of their problems. When disaster occurs and the world unravels, will Bastian and Jack manage to hold on to each other, or fall further apart as they try to survive?

You can check out FALLOUT on Amazon or Smashwords.

Thanks for following our tour! To celebrate our release, we’re giving away a $20 Amazon gift voucher for you to spend on whatever you’d like. Hey, you should buy Fallout, I hear it’s pretty good!

All you have to do is leave a comment on this post with a way for us to contact you, be it your email, your twitter, or a link to your facebook or goodreads account. Please put your email in the body of the comment, not just in email section of the comment form, because we won’t be able to see it otherwise! On April 22, 2015, we’ll draw a winner from all eligible comments! Be sure to follow the whole tour, because the more comments you leave, the more chances you have to win the prize!
Posted by Lisa at 2:40 PM 16 comments:

A month ago, Cyclone Pam devastated Vanuatu, and in particular the island of Tanna. Several years ago I was lucky enough to visit Tanna, and it's a beautiful, unique place with some of the most wonderful, welcoming people you could ever hope to meet. I can't even tell you how magical it was to lie in bed at night in total darkness (no electricity after 8 pm) and listen to the roll of the waves on the beach, only metres away, and, in the distance, the constant rumble of the volcano Yasur.

For most tourists, Vanuatu is a another beautiful tropical destination. For my sister and me, it was a little more than that. Having spent our formative years in Papua New Guinea, sadly not a safe destination to visit anymore for the most part, Vanuatu felt a little like a homecoming. It was listening to a language we hadn't heard in a long time, similar enough to the one we'd learned as kids that we were still able to follow along. It was the smells of the marketplace, of fruit and fish and coconut oil and petrol fumes, that took us straight back to our childhood. It was seeing the Melanesian culture again, listening to the stories, and the songs, and reconnecting with old memories, and with magic.

Here are some of my favourite photographs from that trip.

This is a sand drawing of a turtle, done by the guide at the Cultural Museum. He drew this with his finger, in one continuos line, while telling us the story of the turtle. 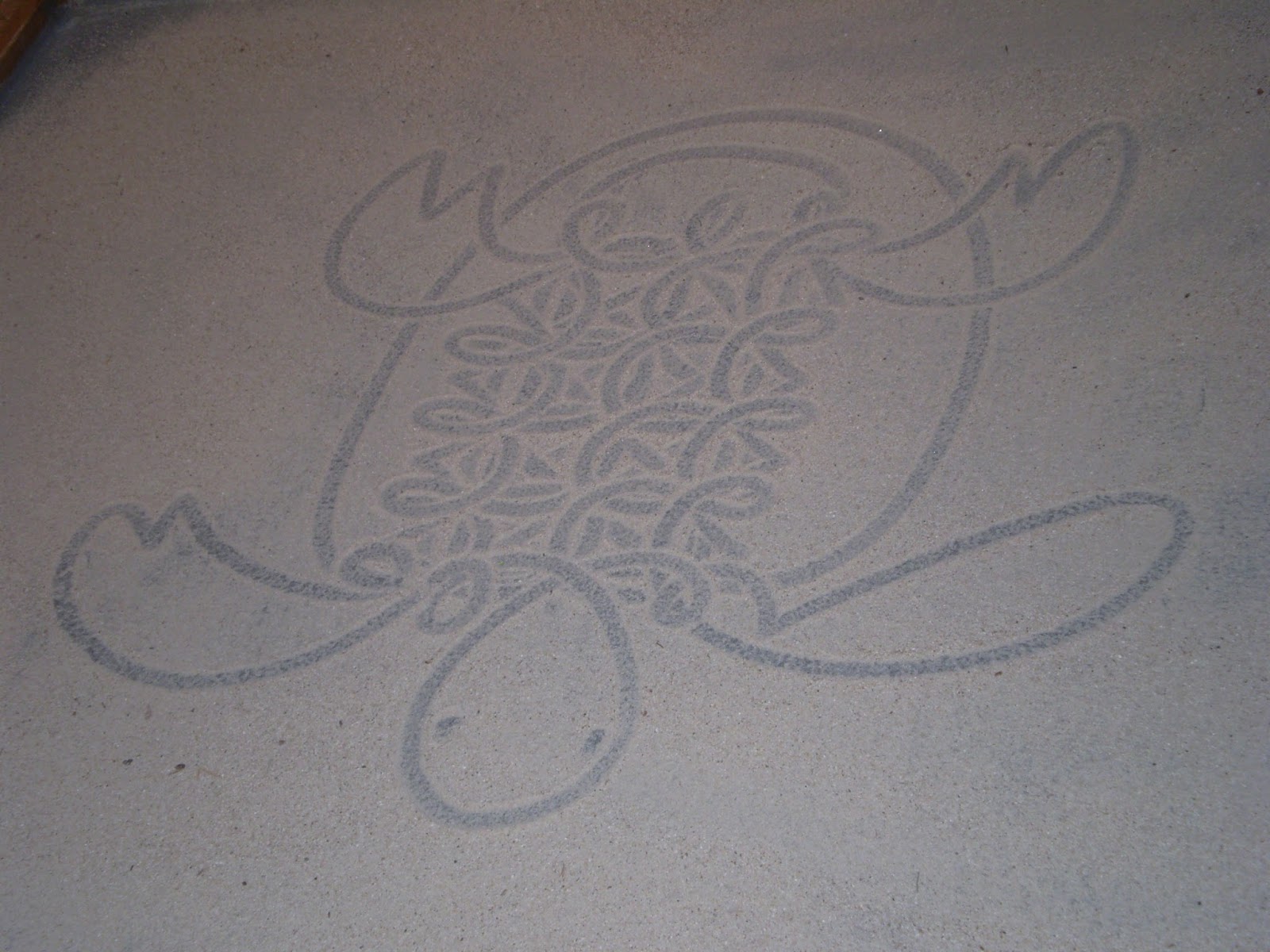 This is my nephew Tom, who was delighted to discover that the Tooth Fairy did find him on Tanna, and even paid him in Vatu instead of dollars! 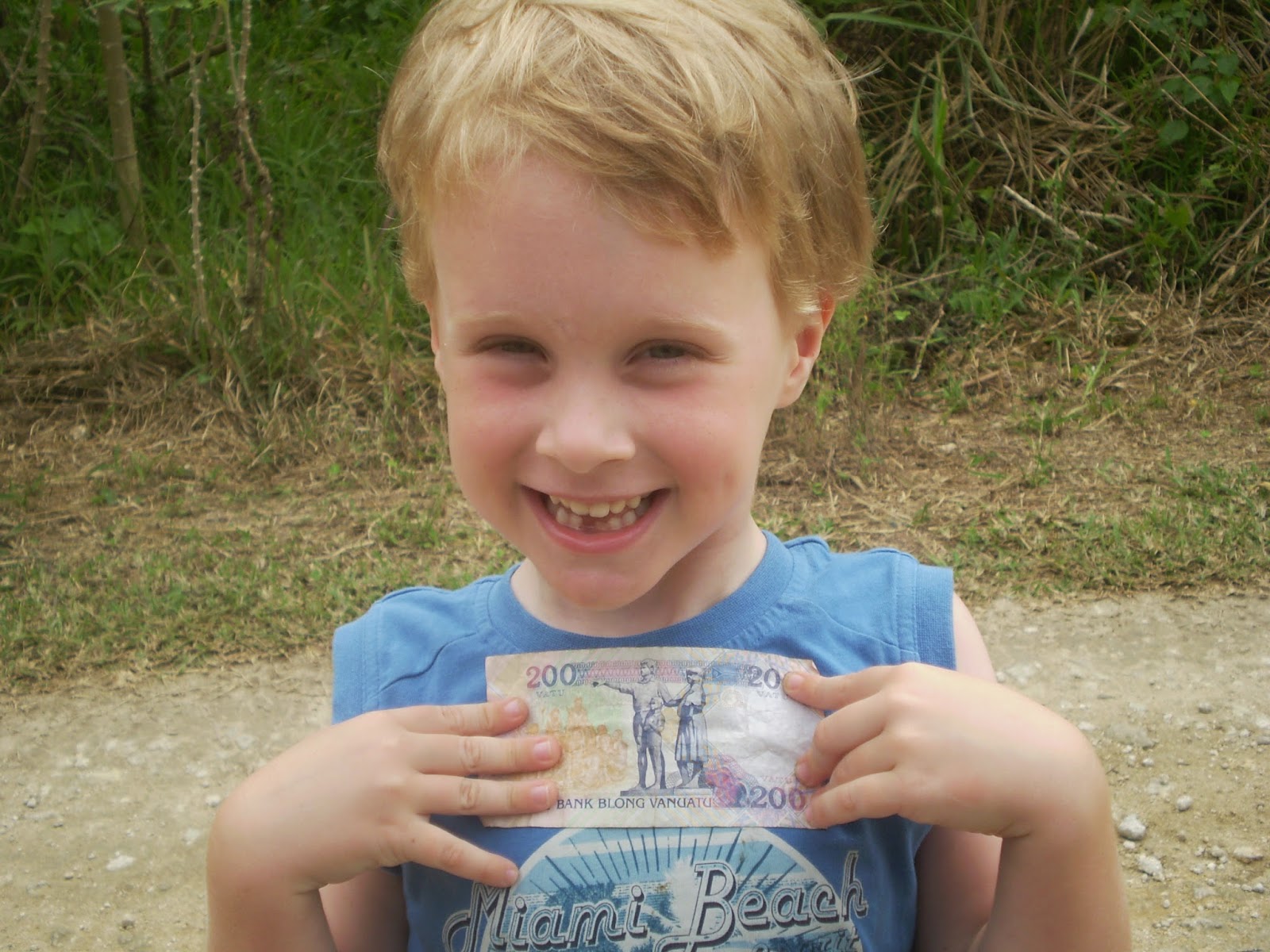 This is Tom and his sister Meg, forging through the shallows, looking for sand dollars. Collecting sand dollars became a thing for them. Every night we'd line them up in the bathroom, and Meg, who was still learning at that stage, would count them all. 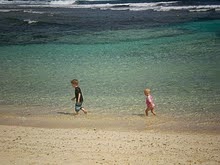 A red starfish and a green sand dollar. These were both in ankle-deep water in the lagoon, which was only a few metres from the units we stayed in on the main island of Efate. There were thousands of them. The bumps on the starfish were soft and almost velvety to touch. 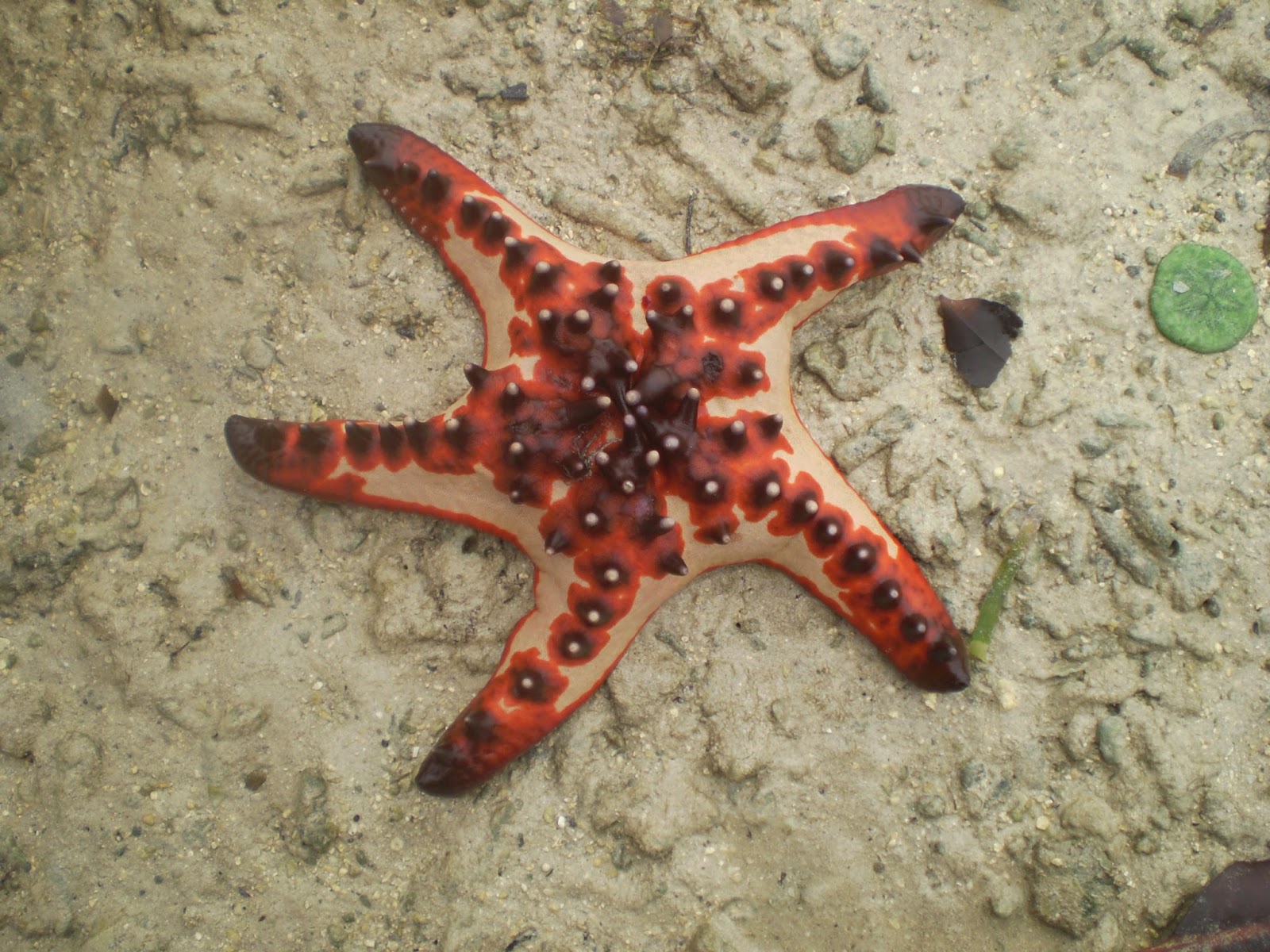 This is the view from the verandah of our bungalow on Tanna. The sand, which you can't see terribly well, is actually black, courtesy of the volcano. There was no electricity after 8 pm where we stayed. No television, no phones, and nothing to do except swim in the ocean, watch the horizon, and let the local kids practice their English on you. I was terrified I would be bored, but I have never been so relaxed in my life, and so sad about leaving a place. 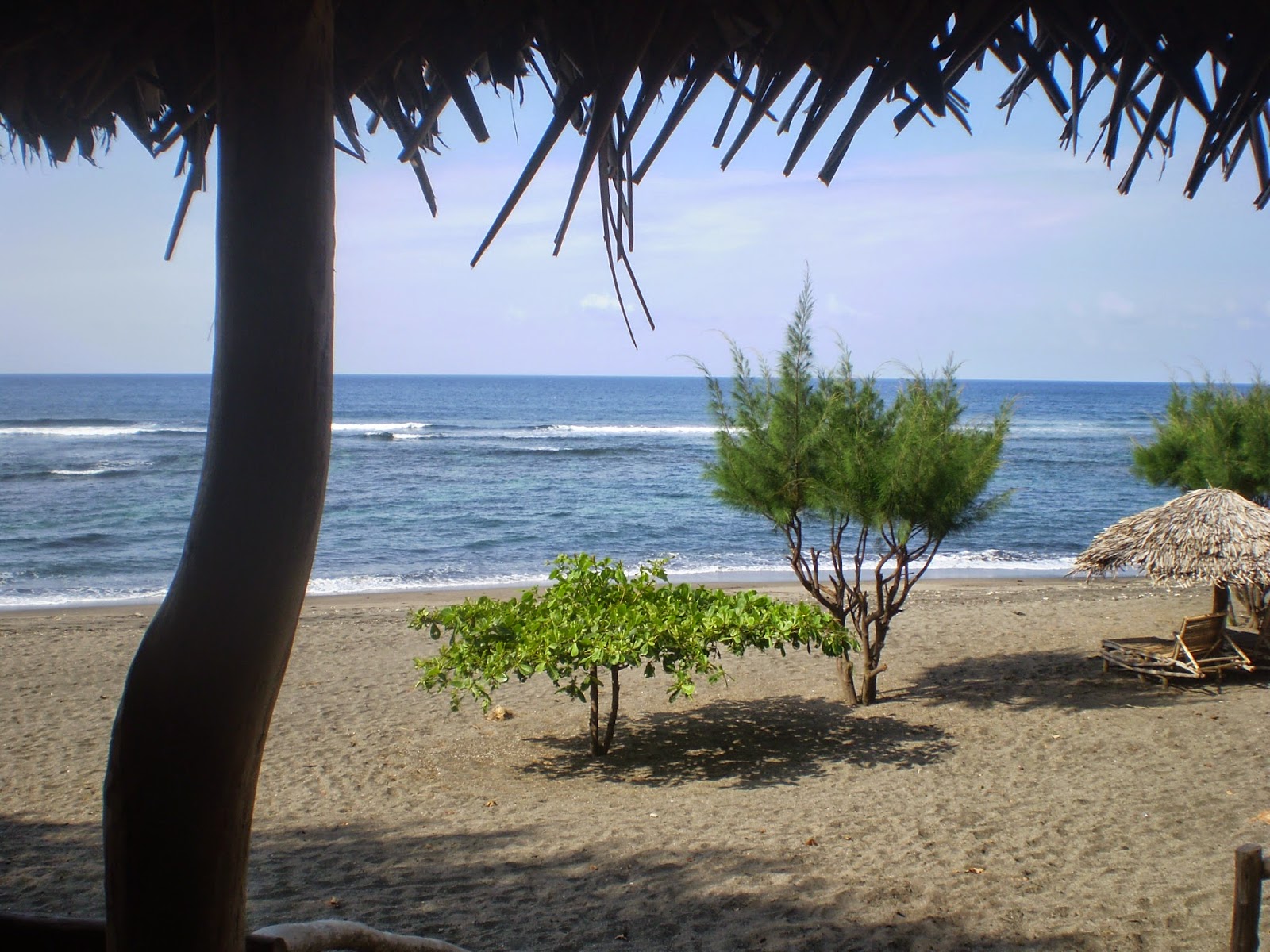 Tanna is a magical place. It's one of the few places in the world where cargo cults still exist, and we were lucky enough to visit a John Frum village and see the people celebrate their faith.

If you want to know more about how to help the people of Vanuatu, please check out the Red Cross or your preferred charity for information.
Posted by Lisa at 5:58 PM No comments: