Happy Kissy Glittery Love. And then what I wrote.

After Tribute and The Island, my third book wasn’t going to be dub-con or non-con. I can write happy kissy glittery love, I promise I can! I just…um…I just haven’t yet. And given that my third book turned out to be set in Ancient Rome, well hell, there was just no chance, was there?

Because there is one rule in Ancient Rome: might is right.

Life in antiquity was hard. Hell, life is still hard in a lot of places. You don’t have to look too far back (or too far away) to see that.

Slavery is a fact of life in the ancient world. Fortuna is a bitch, right? And a slave is a tool, or a possession. A truly valuable slave, one who can read and write or calculate, might be treated with dignity and respect, but for the most part a slave's fortunes depended on the temperament of his master.

In He is Worthy, Aenor's master is a man called Tigellinus. Tigellinus is from history. He was an important man in his day, but very little is known about him today. One thing that has survived is his reputation for cruelty and depravity. And given his competition in those stakes -- the emperor Nero -- that's saying something.

And hell, once you put Nero in the mix, consent flies right out the window. So there was no escaping the non-con in He Is Worthy. But, I swear, I have a reserve of happy kissy glittery love inside me, and one day I'll let out!

Just not this time. Um. Or the next time. But after that (*hastily rearranging projects in my head*)...er... maybe there will be some light at the end of the angst-tunnel after that.

Check out the completed cover for He Is Worthy. 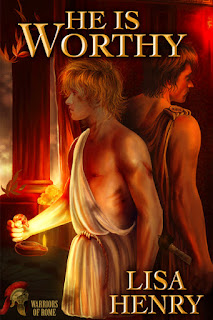 How fantastic does that look? I love the red so much!

Those are my boys Aenor and Senna, by the way, plotting to kill Nero.

He is Worthy is available on November 12, but if you pre-order now, you get it two days early. You also get the chance to win free books from Riptide for a year. A YEAR!

As the Romans would say: Hoc ei propinabo!

Email ThisBlogThis!Share to TwitterShare to FacebookShare to Pinterest
Labels: He Is Worthy, Riptide, upcoming projects

Today I'm outing myself as a total history nerd. And why not? What is history except the biggest library of stories you could ever imagine? Want intrigue? Romance? Adventure? Want danger and death defying stunts? Want comedy or tragedy, or both? History has it all.

Ancient history has always been my favourite. Roman history, in particular.  If ever a submissions call was written for me, it was Riptide's Warriors of Rome. And that's how He is Worthy was born. Hot guys, check. Ancient Rome, hell to the yes.

My sister and I have an ongoing argument about this. We're both history majors. She thinks Victorian England is the best:

To which I offer this:

And here he is having a bath: 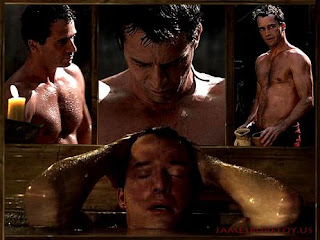 Despite my overwhelming evidence, my sister and I have agreed to disagree. Meanwhile, she said the other day, just imagine what you could do with revolutionary France.