J.A. Rock and I have a new book coming out this month: The Preacher's Son. It starts off with a quite dark premise--betrayal--and then focuses on the journey back from that towards a relationship built on healing and on hope. It's definitely one of our more emotionally weighty books, and we hope that you like it. 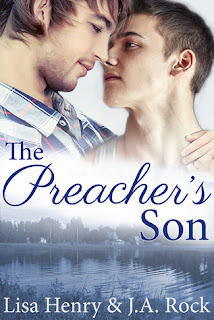 Jason Bannon is a wreck. His leg’s been blown to hell in Afghanistan, his boyfriend just left him and took the dog, and now he’s back in his hometown of Pinehurst, Washington, a place that holds nothing but wretched memories…and Nathan Tull. Nathan Tull, whose life Jason ruined. Nathan Tull, who will never believe Jason did what he did for a greater good. Nathan Tull, whose reverend father runs a gay conversion therapy camp that Jason once sought to bring down—at any cost.

Nathan Tull is trying to live a quiet life. Four years ago, when Nate was a prospective student visiting UW Tacoma, his world collapsed when senior Jason Bannon slept with him, filmed it, and put the footage online. A painful public outing and a crisis of faith later, Nate has finally begun to heal. Cured of the “phantoms” that plagued him for years, he now has a girlfriend, a counselor job at his dad’s camp, and the constant, loving support of his father.

But when he learns Jason is back in town, his carefully constructed identity begins to crumble. As desperate to reconcile his love for God with his attraction to men as Jason is to make sense of the damage he’s done, Nate finds himself walking a dangerous line. On one side lies the righteous life he committed himself to in the wake of his public humiliation. On the other is the sin he committed with Jason Bannon, and the phantoms that won’t let him be. But is there a path that can bridge those two worlds—where his faith and his identity as a gay man aren’t mutually exclusive?

And can he walk that path with the man who betrayed him?

You can preorder The Preacher's Son here at Amazon.

It will be available on January 16.
Posted by Lisa at 3:27 PM No comments:

Mark Cooper and Brandon Mills are back!

For anyone wondering where Mark Cooper and Brandon Mills have got to, J.A. Rock and I were in the process of re-releasing them. And now they're back, and reminding us really, really loudly that it's about time we got to work on the third book in the series, right?

Shut up, you guys, and go back to studying. That means you especially, Mark. We're sure you're failing every damn class. 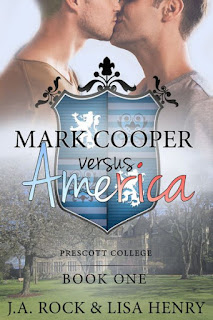 You can buy Mark Cooper versus America here at Amazon, or here at B&N. Links will be updated on my website as we get them! 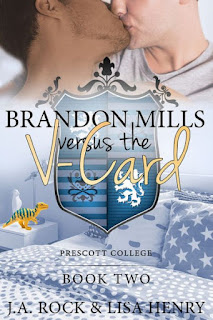 Smart, shy Prescott sophomore Brandon Mills is working hard to overcome his troubled past and be normal. Life at Prescott, and in his fraternity, Phi Sigma Kappa, is good. With the help of his friends Mark and Deacon, Brandon is slowly coming out of his shell. When he accidentally drenches a freshman in orange soda, though, he faces something he’s not ready for: a boy crushing on him.Alex Kekoa pledges Phi Sig because it has everything he wants--a house full of nerds who won’t tease him for being smart, a dog, and Brandon Mills. Brandon is just the type of guy Alex needs to help fulfill his college ambition: losing his virginity. Except Alex doesn’t know that Brandon can’t stand to touch or be touched.When Alex and Brandon are drafted onto the Phi Sig Academic Challenge team, they start spending time together. If there’s anyone who can help Brandon discover it feels good to touch and kiss, maybe it’s klutzy Alex with his cute glasses and his dinosaur obsession. But as the competition--and their relationship--heats up, Alex’s determination not to die a virgin clashes with Brandon’s vow of lifelong celibacy, forcing them to examine what’s truly important to each of them about love.

You can buy Brandon Mills versus the V-Card here at Amazon, or here at B&N.