And a bottle of rum

How come I'd never seen this clip until this week?

It's fun, it's jaunty...and it's surprisingly sweet.

It's everything the title promises.

It's Gay Pirates, by Cosmo Jarvis, and I dare you not to love it.

And now I wanna write a big gay love story about pirates.

I am not computer support, Nate

Guys, really. The ability to use a computer does not make me the person to come to when you want advice on which laptop you should buy. Hence this text conversation with my friend Nate:

Nate: What brand laptop u got?

Nate: Am buying one now. Which one u like? (With two pictures)

Me: The first one.

Me: First one is prettier.

Me: We all want manly. Whats ur point?

Me: What if we call it metrosexual?

Me: It could totally work.

Nate: I'll get that one.

And now I am super jealous because Nate's laptop is prettier than mine.
Sorry, more metrosexual than mine.

I want a new laptop.

Email ThisBlogThis!Share to TwitterShare to FacebookShare to Pinterest
Labels: my friends have issues

How is it halfway through September already? I'm pretty sure it's still only June. But I've been almost insanely busy, which is actually a good thing. You know what they say? If you want something done, ask a busy person.

Yeah, that's probably rubbish. If you asked this busy person to do something, she would tell you to go to hell, but I'm sure there are other, nicer busy people out there who would be willing to help.

So there are a few things to tell you:

You guys know that if you order all four of Riptide's Warriors of Rome series, you get a 20% discount, right? That's a saving of ... (wrinkles nose) ...um...(counts on fingers) ...of... go to hell, I'm busy!* But seriously, check this collection out. And I'm not just using that as another excuse to showcase this awesome cover: 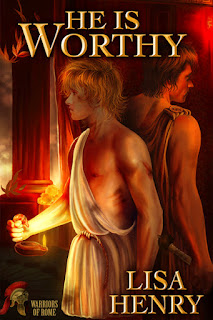 I am in love with this cover.

I want to marry it.

And hey, if you want to read an except of He Is Worthy, you can either check out Riptide, or click on the Books tab at the top of this page!

In other exciting news, I've signed a contract with Loose Id, for my third book with them. It's tentatively titled Dark Space, and it's different from anything I've written before. It's written in the first person, for starters. Oh yeah, and it's set in SPACE and is hopefully creepy and weird, and also seriously hot. The narrator, Brady, is a nineteen-year-old conscripted recruit with a buzz-cut, a big mouth, and a bad attitude. I can't wait to share more with you guys!

Meanwhile, there's an Australian-Samoan police officer living in the back of my head who I've been neglecting lately. That one's light on the kink but heavy on the angst, and I think it will be the next cab off the rank.

What are you guys up to?

Okay, so I had to come up with an avatar for my author page over at the Riptide website. And then it occurred to me that you know what...all of my little pictures for everything should be the same: Goodreads, Twitter, Google, Amazon, the whole shebang. So I ran through the house looking for something cool I could take a photograph of, and I found this: 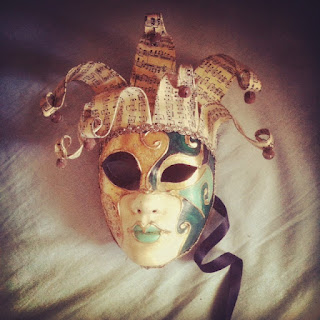 This is a Venetian mask. I got it years ago in Venice, while backpacking. And even though it's just a paper mask, to me it will always represent something else: the power of positive thinking. Or possibly the power of denial.

"Yes," my sister and I said, "yes we can get these masks through the next eight weeks without crushing them."

I don't know how many of you guys have backpacked, but there's not a lot of room for delicate souvenirs. Particularly if you're already lugging around a Turkish carpet you bought off some guys in Selçuk, and a tiny statue of Priapus that is wholly inappropriate.

But I really, really wanted that mask.

By the time we hit the UK, we had it down to a fine art.

And since I was the first one coming home, guess who got bring everything back to Australia?  I looked like a pack camel. My credit card may have melted when I had to pay fees for extra baggage. I almost had a break down when I woke up in the middle of the flight with my boots jammed on top of the mask bag.

The gargoyles look fantastic in my brother-in-law's bar. The vintage posters in my sister's study are just beautiful. The dog has only vomited once on my Turkish carpet, and my Venetian masks are still hanging on my wall.

Let's Talk About the Weather

Wow, it's September already, and the first day of spring here in Australia. Not that spring counts for anything in the tropics. None of the conventional seasons do. We have two seasons in northern Australia: the dry season, and the wet season. Or, if you're a local, just The Wet. You have to give us points for brevity at least.

The dry season roughly corresponds to winter. It doesn't rain, and for about two weeks we all have to dig around in the back of our cupboards to find our warm clothes. And because we only use them for two weeks every year, they're at least a decade out of date and we all look like refugees from charity shops.

For a few days this winter I was wearing jeans, thick woollen socks with holes in the toes, the one long-sleeved t-shirt I could find, and a fleecy jacket I last wore when I was backpacking around Europe. I have mixed feelings about that jacket. While it's great in cold weather, when I  first tried it on in a tropical summer, the zip got stuck and I almost died of heat exhaustion.

The first is that it's time to clean the dust out of the air conditioner.

The second is that it's time to get ready for The Wet. This mostly means clearing up my yard in case of cyclones, but most of us have that down to a fine art. It all comes down to years of practice that you hope you'll never have to put into use. Except for that one time...

"Hello," I said to my neighbours. "I don't think we've met. I'm Lisa from next door. That's my tree on your roof."

I took this photo last wet season. It's my front yard. It doesn't really capture the luminescence, or the fact that my front path is actually raised. 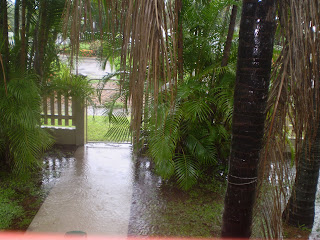 There's been no rain yet this year, but when it comes it will stay for weeks on end. We won't see the sun, but we'll feel it every time there is a respite in the rain. The air will be heavy with humidity so thick that air conditioners can hardly touch it. There will be so much rain that the water won't have time to drain away between deluges. I won't be able to hear my television because of the barrage of rain on my tin roof. When it gets like that -- loud, monsoonal -- I'll take a glass of wine and go and sit on the veranda and watch it, because there's nothing else to do.

Tell me about snow! Snow is incredibly exotic to me!
Posted by Lisa at 7:29 PM 2 comments: