The Two Gentlemen of Altona is out today! (or tomorrow, I don't understand the international date line...)

Guess what day it is today? It's release day for The Two Gentlemen of Altona, the first in JA Rock's and my Playing the Fool series. Here's what Riptide has to say about the series:

Mac and Henry aren’t just an odd couple—they’re completely improbable: a tough-as-nails, by-the-book FBI agent who picked the wrong week to give up caffeine and donuts, and a young con man who’s as handsome as he is difficult to pin down. But when they’re stuck on the run together, the snark and heat reach Shakespearean proportions. Or maybe that’s just Henry’s flair for the dramatic.
Rural Indiana has never seen an accidental crime-fighting duo quite like this. But when the danger’s over and the play’s done, Mac and Henry may have to write their own script to find a happy ending.
And here's the blurb for The Two Gentlemen: 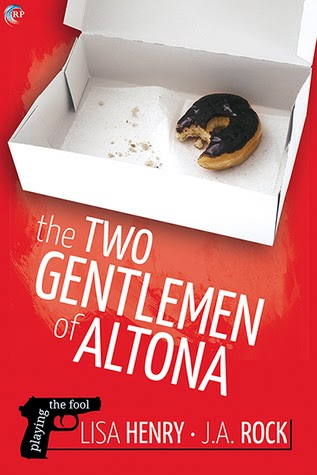 Mischief, thou art afoot.
Special Agent Ryan “Mac” McGuinness is having a rough week. Not only is he on a new diet, but he’s also been tasked with keeping Henry Page—the world’s most irritating witness—alive. Which is tough when Mac’s a breath away from killing the Shakespeare-quoting, ethically-challenged, egg-obsessed Henry himself. Unless killing isn’t really what Mac wants to do to him.
Con man Henry Page prefers to keep his distance from the law . . . though he wouldn’t mind getting a little closer to uptight, handsome Agent McGuinness. As the sole witness to a mob hit, Henry’s a valuable asset to the FBI. But he’s got his own agenda, and it doesn’t involve testifying.
When evidence surfaces of a mole in the FBI office, Mac and Henry are forced to go into hiding. Holed up in a fishing cabin, they’re surprised to discover that their feelings run more than skin deep. But as the mob closes in, Henry has to make his escape. And Mac has to decide how far he’s willing to go to keep Henry by his side.
And if you want to win some absolutely awesome prizes--seriously, these are such cool prizes I want to keep them myself--then don't forget to follow our blog tour and leave a comment for your chance to win. I mean, there is junk food at stake here! Don't miss out!
December 29, 2014  -  The Blogger Girls
December 29, 2014  -  On Top Down Under Book Reviews - Spotlight
December 29, 2014  -  Prism Book Alliance
December 29, 2014  -  Sinfully Sexy Books
December 30, 2014  -  KT Book Reviews - Review Stop
December 30, 2014  -  Cup O' Porn - Spotlight
December 30, 2014  -  Joyfully Jay
December 30, 2014  -  La Crimson Femme
December 31, 2014  -  The Novel Approach
December 31, 2014  -  The Jeep Diva
December 31, 2014  -  MM Good Book Reviews - Spotlight Stop
December 31, 2014  -  Smoocher's Voice
January 1, 2015  -  Book Reviews and More by Kathy
January 1, 2015  -  Things I Find While Shelving – Spotlight Stop
January 1, 2015  -  Creative Deeds
January 2, 2015  -  TTC Books and More – Spotlight Stop
January 2, 2015  -  Love Bytes
January 2, 2015  -  Crystal's Many Reviewers
January 2, 2015  -  Scattered Thoughts and Rogue Words - Spotlight Stop
Posted by Lisa at 4:26 PM