Hi everyone! Today on the blog I’m hosting the very talented Kate Sherwood, author of the wonderful Dark Horse series, and the upcoming releases The Fall and Riding Tall. Kate, welcome to the blog!

I’ll start with what is becoming my standard question to ask visiting authors. When you look out the window, what can you see? (I ask this because I get very excited if people answer “snow”. Because I live in the tropics, and it’s hot, and snow is incredibly exotic to me!) So, what’s outside your window?

I do see snow! Not too much of it right now – we had at least a couple feet last week, but it’s been warm enough to melt most of that. Other than the snow… trees, and then the lake. It’s a pretty excellent view.

I totally have this image of you living somewhere in wilds of Canada, surrounded by horses and hot men. Is any of this at all accurate?

There is a hot-man-shortage, unfortunately. And wilds might be a bit of a stretch, as is surrounded by horses. But I do live… not quite in the country, because I only have about a half-acre of land and I have neighbours on both sides. But across the street is a farmer’s field (beef cattle grazing) and in the back is the lake, so… pretty countrified, I guess.

I'm starting to think there is a worldwide hot man shortage. Quick. Somebody notify the authorities!

How long have you been writing, and do you remember the first story that you wrote?

I’ve been writing seriously for… hmmm… Dark Horse  came out in May 2010… I submitted it in November 2009, I think… and I’d probably been writing for about a year before that? So a bit more than five years! Wow, that’s longer than I would have guessed.

Lol! I'm the same. Didn't I just start doing this last week? Where has the time gone?

I honestly don’t have a preference. It’s kind of cool to write both, actually, because I can explore similar themes in each sub-genre, and it’s really interesting to see how things play out differently when there’s a woman involved.

That said, my readers clearly DO have a preference – I don’t get anywhere NEAR the sales on my m/f stuff that I get on my m/m. I know there are a few m/m readers who braved the m/f storm on my behalf, but mostly I think they’re two separate groups, and one of the groups is a hell of a lot bigger than the other!

I still like writing m/f, though. And I have a good day job so I’m not depending on book sales to put food on the table. So I writes what I wants!

For you, what makes the perfect romantic hero or heroine?

I’m a sucker for quiet emotional strength. Not necessarily blatant enough to be “tough”, but just… solid. I like torturing my characters, of course, and I like knowing that whatever I do to them, they’ll pull through.
You write a lot about guys running to (or returning to) small towns who end up confronting their pasts. You seem to have a real affinity with small towns, and the warm, and sometimes claustrophobic, way that they operate. Are you a small town girl yourself, or a sophisticated city dweller at heart? And if money were no object, where would you most like to live in the world?

I grew up in a mid-sized city, and then spent quite a while in Montreal and then Vancouver. I lived right downtown both places. I like cities, but when I moved to the country, I felt like I was coming home. Now when I go back to the city I just want to punch everyone in the face. Especially in traffic. They need to get out of the way. I’m trying to drive, here! So I guess I’m destined to either stay in the country or end up in jail. I chose the country!

In terms of where I’d live if money was no object? Every year right about this time I go through a phase of winter-hatred. It just seems insane that the world is going to be frozen solid for the for the next five months and we’re all just going to try to go about our daily lives as if we don’t even notice that we’re living in some sort of arctic wasteland. But then that goes away, and I start appreciating the snow. There’s something really special about the crunch of really cold snow under your boots on a windless day, or bundling up and lying back in the snow and looking up at the sky, and everything’s muffled and distant…

Yeah, I’d probably want to live somewhere with snow. Which means I might as well stay right where I am. I think I’d spend my money on staff rather than exotic locales. I’m very lazy and would love to have people looking after me!

Me too! Anywhere in the world as long as I didn't have to do my own housework would be nice!

Here’s my most unfair question of all: of all the characters you have written, who is your favourite?

I’ve got a soft spot for Dan from Dark Horse, for sure. But I’m almost maternal towards him. I want to be sure he’s safe and happy, but I don’t want to actually… put up with his shit. I think I’d get along better with Jeff from Dark Horse. Or maybe Adam Challoner from the Against the Odds series. They’re both older and a bit wiser. They wouldn’t need as much looking after as some of my younger characters would!

And if the Zombie Apocalypse was coming (and let’s never assume it isn’t), which of your characters would you want by your side? And who would only slow you down?

Hee! I answered a similar question for a different blog, and I’m just as tickled now as I was for them.

I have one character who’s an actual super-hero (Toby from The Shift) so if I’m allowed to have him, I want him! Other than him, his partner Cash would be good. Cash has spent his life hunting monsters, so he’d be good with zombies. Joe Sutton from The Fall would be good… he’s a rancher, and generally useful. Ooh, maybe Jack from More than Chemistry – he pretends to be a businessman, but really he’s a science nerd, and that could be useful. And Remy from the Against the Odds series is a total survivor, so maybe I’d bring him and hope he managed to drag me along with him.

Who’d slow me down? Mackenzie from The Fall, probably. He gets better over the course of the book, but even by the end he’s not entirely useful. I think most of the rest of my guys would be pretty good zombie-hunters.

And here’s where you get to tell us all about The Fall and Riding Tall:

Yay! The Fall is the first book in a two book series. It was meant to be only one book but I realized that I had a lot to say, so… two books! There’s a definite Happy For Now at the end of the first, though, so it’s not imperative that you read the second book in order to get closure.

The Fall is out on 16 December. You can pre-order it from Dreamspinner. 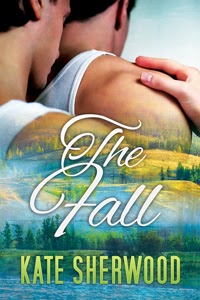 Every relationship leaves something behind. Dumped by his sugar daddy, part-time model Scott Mackenzie somehow ends up owning an abandoned church in rural Ontario. He dreams of using it for gay weddings, even if he’ll never have one of his own.

Joe Sutton is trying to keep his family together after his parents’ deaths. Between the family ranch, his brother’s construction company, and commitments around town, he doesn’t have time for a relationship. But Mackenzie is hard to ignore.

As both men fight their growing attraction, challenges to Mackenzie’s business threaten their relationship. If he can’t make it work, he’ll have to crawl back to the city in defeat. But the only solution involves risking the ranch Joe loves, and each man has to decide how much he’ll sacrifice for the other.

And Riding Tall comes out in February 2014. 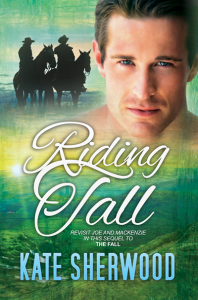 Snow sure is pretty to look at, but being from the same area of the world as. Lisa, I'm not sure I could deal with the reality of it, lol. It'll stick to the sub tropics :-D Housecleaners would certainly come in handy, though! And a cook as well, if we're throwing wishes around anyway...

Kate, I'm glad you've got a good day job that means you can write the stories you're compelled to, because I enjoy reading all of them.

Oh god yes! A housecleaner! That would make life just about perfect!