I can't believe The Good Boy is out on the 26th! Well I can, because I've been telling people for ages. What I should have said was that I can't believe it's already this late in March. How did that happen? Anyway, it's time to introduce you to some more characters in The Good Boy.

In The Good Boy that couple is Brin and Ferg. Brin is the bratty, enthusiastic sub, and Ferg is the patient put-upon Dom. But it works for them. If you want to read more about Ferg, then head over to JA Rock's blog. Because I'm going to tell you all about Brin.

Um...Brin. What can I tell you about Brin? Even our MC Derek's not always sure how to take Brin:

“How was lunch with the guys?”

“Good. Ferg is good, and Brin is…” A paisley Vera Bradley razzleberry explosion of enthusiastic brattiness? The wunderkind of impromptu burrito puppetry? Derek had no words.


Brin is also Derek's ex, but they're still friends. Mostly because after dumping Derek, Brin hooked up with Ferg, one of Derek's friends. And I mentioned they're disgustingly happy, right?

Brin is everything he appears to be -- camp, bitchy, fabulous, and covered in enough hair product to cause an ecological disaster should he ever swim in the ocean. But he's also a lot more than that. So much more, in fact, that Brin has snagged his own story. It's called The Naughty Boy, it's short and sweet, and it's scheduled for release on April 30. 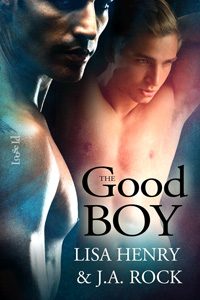 “You’ve come to the right place.” Brin picked up a notepad and pencil. “Welcome to Gettin’ Yo Ass Spanked 101. First, I’m going to need you to tell me something Derek does that irritates you. And don’t say ‘nothing.’ Yes, you worship him. Yes, he’s a great guy. But I dated him, and I know he leaves his toenails in the cracks between the bathroom tiles and listens to Journey, so don’t bullshit me.”

“Well, okay. He’s been really busy lately, and sometimes it makes me kind of mad. Which is stupid, because it’s not his fault, and it’s not even his job to pay attention to—”

“Stop right there.” Brin pointed the pencil at Lane. “It is his job to pay attention to you. If he’s not giving you the attention you need, you’re going to earn it. That’s what brats do. It’s what we’ve done for centuries.”

“You’re going to ask him to be, however indirectly. And I could be wrong, but I don’t see how Derek could pass up the invitation.” He looked Lane over. Lane glanced down at himself, then back at Brin.

“A tantrum, Lane. I’m sure they weren’t permitted in Sister Shush’s School for the Clinically Silent or wherever you went, but they exist, and they’re actually quite fun.” He sat up straight. “Okay. I’ll be Derek. And I’ll make some completely reasonable request, like, ‘Dear, can you take out the trash?’”

“He should; that’s exactly what you are. Okay, Lane, could you please take out the trash?” He gestured at Lane. “Now tell me you don’t want to.”

Brin sighed. “Tell you what. You be Derek. And I’ll show you how it’s done. Okay? Ask me to take out the trash.”

“Can you take out the trash?”

“The trash needs to go out.”

“You can take out your own damn doo-doo, honeybear. I’ve got Kardashians to keep up with.”

Lane froze, mouth open. What would Derek say to that? Or Ferg? Or any Dom? Lane felt half nauseated, half amused as he imagined what Acton’s response would have been if Lane had ever been stupid enough to talk back to him.

“That’s not how you talk to me,” Lane said, trying to sound stern.

“Oh, isn’t it? Did this become a police state when I wasn’t looking? This is America. Freedom of speech, freedom of tone, the right not to have my home quartered by the military.”

Jesus. You couldn’t say that kind of shit to your Dom, or he’d…

Get pissed and punish you.

That was what Lane wanted, right?

“Take the trash out, or else.”

“Or else what?” Brin stood and put his hands on his hips. “You spend three days ignoring me, and then you finally notice when I’m not acting like your perfect little maid? You could at least ask me how my day was before you go ordering me around. But apparently I rank lower on your priority list than trash.” He dove back onto the couch and turned away, burying his face in the cushion.

Lane took an uncertain step toward the couch.

Brin rolled over and looked at Lane, dropping the act for a moment. “And you can embellish here—sighs, huffing, turning away and hugging a sofa cushion, throwing something small, like a pen or a day planner. Whatever works for you. Raise the volume of your voice as the tantrum progresses, and crank up the whine factor. Don’t push things too far too fast, or he might walk away to give you time to settle down. You want to keep his attention on you, until he says ‘enough’ and pulls you over his knee.”

“How can you do that to Ferg?”

I want Brin to bedazzle my soul.

Ah, but he already has! He's magic!

Looking forward to this one...

Thanks, Virginia! I hope you enjoy it.