Cover Reveal for The Good Boy!

I love it when I get to do this. Seriously, this is the fun part! This is the part where a thing that was just a file on my computer suddenly becomes a real book. And here it is, the cover for The Good Boy! 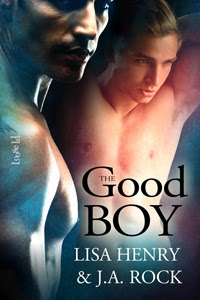 The cover artist is Fiona Jayde, and I think she's done a great job here. And the words are by me and JA Rock!

Introverted college student Lane Moredock is in a bad place. His mother has been arrested for securities fraud, his father is on the run, and everyone, including the SEC, suspects Lane knows where the missing millions are. Lane, with no money and nowhere to live, makes a desperate deal that lands him in trouble and leaves him unwilling to trust a so-called Dom again.

Photographer Derek Fields lost money to the Moredocks, and is as sure as anyone that Lane is guilty despite his claims. A chance meeting with Lane shows him there might be something more to the young man than arrogance and privilege, and Derek wonders if Lane might be just what he’s been looking for: a sub with the potential to be a life partner.

As Lane slowly begins to open up to Derek and explore his needs as a submissive, the investigation closes tighter around him. Lane might be everything that Derek wants, but first Derek needs to trust that Lane is innocent—and Lane needs to trust Derek with the truth.

Funny, I have a very similar cover on my website...

What a crazy co-incidence!

It looks amazing! Can't wait to read it ^^