It started on Friday night when I thought I'd read a chapter or two of J.A. Rock's The Brat-tastic Jayk Parker, the sequel to the hilarious Wacky Wednesday, during which Jayk and Amon tie the knot. You know, just a chapter or two. Famous last words. Hours later, cursing myself for being stupid enough to start it when I needed to be up early in the morning, I finally got to sleep.

"That's us. Getting gay married tomorrow."
"We just call it getting married."

You must stop reading this now, I thought to myself. You're being the celebrant at a gay wedding tomorrow! I mean, just a wedding. 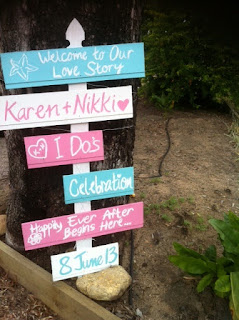 So, I'm not actually a celebrant, but same sex marriage isn't yet legal in Australia. So while a part of me would have been happier in the audience while someone official did the job, I was absolutely honoured to be asked to do it.

But it was a wonderful day, and a beautiful beachside location. And the good news is I didn't screw up any of my lines. And, afterwards, a woman I hadn't met before came up to me.

So, there you have it. I might be doing this again for another lovely same-sex couple later in the year. Port Douglas, here I come!

BTW, Dina, I charge nothing but alcohol and finger food.

Other highlights included being outed as a writer of gay erotica during the speeches. "Well," said one of the brides, "when we needed someone to ask to be the celebrant at our wedding, who better than someone who writes gay erotica?"

Fair point, I guess, although the boy/boy thing probably doesn't push their buttons at all. Except for one unnamed guest who admitted that guys getting it on together were hot, and erect penises were aesthetically pleasing, and she liked looking at them as long as she didn't have have them anywhere near her.

The quote of the night was from one of the blokes there who said, "You know, that was really confusing. When they kissed, I didn't know whether to be happy or get an erection."

In the end, I think he was happy to have an erection. Aren't all guys?

But the quote of the morning after was this, from a very under-the-weather cousin of the bride: