OMG, you guys! The awesomely talented Kari Gregg is here, today, on my blog, to talk about her latest release I Don't: A Christmas Wish. Excuse me while I rush around and tidy up... Now quick, act cool and pretend I was just saying something witty. 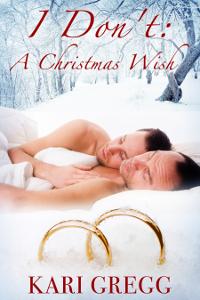 Oh, hi, Kari! Thanks so much for stopping by to answer some questions. We’ll start with the easy ones:

How long have you been writing?

Heya, Lisa! And thanks for inviting me to stop by!  How long have I been writing?  Oh, man. Forever. A grade school teacher found a snarky polar opposite of a Casey-at-Bat style poem I’d written about our school’s epically horrible basketball team actually winning a game. I’d written stuff before then, but that was the first time I can remember getting caught at it.

Sounds brilliant! I once got detention for satirising my high school principal as Hitler, I mean, he had the moustache and everything. What was I supposed to do? Ignore it?

Do you remember the first thing you ever wrote?

No idea. I’d have to say that Casey-at-Bat style poem since that was the first I got busted for, but I have no idea even what I titled it. I do still have a copy because I remember stumbling over it a few years ago. Cute. But it’s buried in a box somewhere.

Is there any genre that you wouldn’t write?

Historical. Too much research I don’t have enough patience for. My brain isn’t wired that way. I’d purely suck at it.

As someone who lives in tropical northern Australia, I’m fascinated by snow. Also, the idea of a White Christmas is completely foreign to me. When I was a kid, I thought White Christmases were something that only existed on Christmas cards. Do you get snow in your part of the world for Christmas?

Oh, you bet we get snow. In I Don’t, when Seth talks about measuring snow in feet rather than inches? That wasn’t an exaggeration. Around here, we get loads of snow. We cut a straight stretch of hillside into the trail we have running through our woods to take full advantage for sledding every winter. Our neighbors have snow plow attachments for their ATVs because the DMV rarely makes it out our way…I live in a winter wonderland, the kind that requires a degree of self-sufficiency and an alternate heat source because, guaranteed, we’ll be snowed in and out of power at some point every year. It’s beautiful, though, and sooooooooo peaceful. As long as you don’t mind hiking a quarter mile from the main road when no vehicle barring a Snowcat can make it up our hill.

I cannot even imagine that. Seriously, I'm trying, but I'm drawing a blank.

Random question that I try to remember to ask everyone: What you can you see outside your window at the moment?

Bare branches and spiny tree limbs marching up the opposite hillside. In this part of the house, you can’t see other houses at all, winter or summer. In the summer, it’s better because the leaves block other houses from view no matter what window I look out. Not that we have a lot of neighbors, because we don’t, and not that we would live somewhere we didn’t truly have any neighbors, because I wouldn’t. I just like the idea of my home being a retreat away from the world. My house in the woods = my little slice of heaven. The only bummer is nobody delivers pizza this far outside town.

Sounds beautiful. Except for the part about no pizza.

What can you tell me about your latest release, I Don’t?

Well, it’s a huge departure from what I usually write, although I did go for a few laughs in my charity short with Riptide, Foreshock. Zachary and Brian in In the Red were rather snarky too. To my readers, a romantic comedy might seem bizarre coming from me, but the smartassery is a big part of who I am IRL and closest to my natural voice. Plus, Question Six meant so much to me. I was invested in that fight before Maryland passed the law; I’d been debating and bumping heads since last fall. I Don’t put a smile on my face when I needed it. Made me laugh.

Sad to say, we're still lagging behind in this part of the world. Not for lack of trying though.

I Don’t is a bit different from your usual work. As a writer, I like trying different things all the time, but were you worried about disappointing your dub-con and D/s loving fans?

Of course, I worried about disappointing readers who love the darker, grittier stuff. That’s why I took such pains to make sure everyone knew that this wasn’t my typical. I wanted readers to be fully aware of what they were getting before they plunked their hard-earned dollars on the table. I like my dubcon stories. No, I LOVE writing my button pushy, dubcon stories or I wouldn’t have written so many of them. But I like doing other things too. I like stretching my legs as a writer, challenging myself, trying different things. A lot of those experiments never make it off my hard-drive, a great many of them deservedly so, LOL. Question Six and this story meant so much to me on a personal level, though…I had to do it. As long as I clearly marked and marketed my departure from the darker stuff, I thought readers would know and be able to make up their minds about whether they’d like to follow me along on this ride too. If not, no harm, no foul. Another dark story will be coming. I haven’t given those stories up, not by a long mile, but if the answer is yes, fasten your seatbelts, compadres. I’m about to entertain you with my crazy. ;-p

Yes, please! More crazy! And for your dub-con and D/s loving fans (of which I’m totally one), when is our next fix?

I can’t spill any details yet, but something’s in the works that I think readers who like to take a stroll down the dark side will enjoy. Lots. ;-)

I still haven’t figured out if I’m supposed to ask this question, or if authors are meant to be like parents and incapable of answering. But I’ll go ahead and ask anyway: Of all the characters you’ve written, who is your favourite and why?

Micah from Spoils of War/Plunder. I love his vanity and he has such a lyrical way of thinking that is incredibly alluring to me because it’s so foreign to how I tend to think & process things. Writing him is a pure joy. I love how utterly broken and neurotic he is, but how he keeps on going, keeps trying, keeps fighting. Got a core of solid steel, that boy. I love that, in Plunder, he finally begins to take control of his life, to act rather than being acted upon. He’s a sweet, beautiful mess. And I love him.

Speaking of Micah…I’m not sure how the rumor started that I’m writing another sequel to Spoils/Plunder, a book 3, but I’m not. I never say never when it comes to these things, very true. I might one day write an epilogue or a short for Micah and Eli. Revisiting them again years after the war with Herra, when they’ve settled into their post-war lives, strikes me as especially lovely. I might return for that, as a freebie sort of deal, but I don’t have any novellas or novels in the works, no.

Micah is a great character, and I loved seeing him develop over the course of both books.

When the Zombie Apocalypse comes, which of your characters do you want by your side?

It’d be a toss-up between Emmett from Collared, who runs a security company, or Zachary from In the Red, who is an FBI agent on loan to TFOS (which basically goes after terrorists from the money angle). Zachary can be quite lethal when he chooses to be, but Zachary has a questionable moral compass, to say the least. He went after Brian, even knowing how damaged & off-kilter Brian was, didn’t he? So let’s vote Zachary as my Hero Most Likely to Throw Me Under the Bus. Emmett, on the other hand, was all about Connor. The dude was obsessed. If I stick with Connor during the zombie apocalypse, befriend him, then Emmett would keep me alive just to make Connor happy. If Emmett can tolerate David, handling me would be no problemo.

Emmett would be a great choice! He had that scary alpha male thing nailed! So, as you flee from the zombie hordes and head for the hills, who is in charge of your ragtag group of survivors?

Brian from In the Red. The dude is smart. He also had his bug-out bag packed and good to go in ITR. He already has an isolated farm in Garrett County, MD, too, which strikes me as an ideal shelter.

Another perfect choice. The guy will see you through the Zombie Apocalypse without much trouble at all. And which of your characters isn’t going to make it?

Cal and Gabriel. I, Omega ends with Gabriel accepting and embracing his new life with Cal, but there’s so much of their relationship that they haven’t worked out yet. Like HOW TO COMMUNICATE. Epic fail. Unless they’ve learned to talk to each other, they’re toast.

I'll keep my fingers crossed for them!

Now check out the blurb for I Don’t: A Christmas Wish.

At least he isn’t pregnant.


Seth Murphy campaigned for Maryland’s Question Six, wildly celebrating the Election Day victory for marriage equality. Divorce attorney and live-in boyfriend Owen, however, believes just as passionately that the gay community should focus on a plurality of equal rights protections instead of allocating so many resources and man-hours to one hot button issue. Owen won’t marry Seth. Relationship deteriorating, the couple visits the Murphy farm outside Brunswick for Christmas. Seth’s family never considered that Seth and Owen wouldn’t be first in line for a marriage license as soon as same-sex marriage passed. When they find out there won’t be a wedding, their season of miracles is invaded by pornographic gingerbread cookies, frowning church ladies, and a determined father with a tactical assault shotgun. Neither Seth, Owen, nor their love may survive the family holiday circus to say, “I don’t.”

Thanks so much for stopping by, Kari!

You can get your hands on I Don't from Amazon, Barnes & Noble, ARe and Smashwords.

And if you leave a comment here or on the crosspost at Goodreads, you can win a copy of I Don't! Entries close December 14, 11:59 PM EST - that's US time.

And Kari was lovely enough to let me go over to her site and talk about non-con and dub-con. If you want to check that out, you could win a copy of Dark Space.
Posted by Lisa at 12:00 AM