Coming Soon - He Is Worthy

Do you guys want to win a galley proof of He Is Worthy? 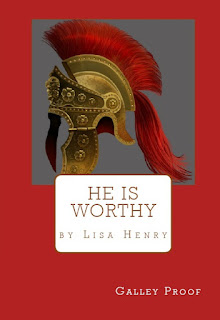 Wait, first things first, right? Do you guys want to know about my next book?

It’s called He Is Worthy, and it’s set in Ancient Rome, which, as we all know, is awesome. My inner history nerd has been salivating ever since I saw the submission call for Riptide Publishing’s Warriors of Rome series. Like this, but you have to go “Mmmm… history…” instead of “Mmmm… donuts…”

Here is the blurb for He Is Worthy:

Rome, 68 A.D. Novius Senna is one of the most feared men in Rome. He’s part of the emperor’s inner circle at a time when being Nero’s friend is almost as dangerous as being his enemy. Senna knows that better men than he have been sacrificed to Nero’s madness—he’s the one who tells them to fall on their swords. He hates what he’s become to keep his family safe. He hates Nero more.


Aenor is a newly-enslaved Bructeri trader, brutalized and humiliated for Nero’s entertainment. He’s homesick and frightened, but not entirely cowed. He’s also exactly what Senna has been looking for: a slave strong enough to help him assassinate Nero.


It’s suicide, but it’s worth it. Senna yearns to rid Rome of a tyrant, and nothing short of death will bring him peace for his crimes. Aenor hungers for revenge, and dying is his only escape from Rome’s tyranny. They have nothing left to lose, except the one thing they never expected to find—each other.

There’s a catch. If you guys want to win a copy of the galley proof, Riptide has to break a thousand newsletter subscribers. So go and sign up here!

And, you guys, if you think the galley cover looks very cool (which it does!) wait until you see the real thing. I can’t wait to show it off!

In other exciting news, you can now order Tribute in paperback.

Trees have died. This shit just got real.
Posted by Lisa at 10:41 PM

Almost too real to handle. Oh my god I'm so excited! That blurb sounds GREAT. And Tribute in paperback!

I kind of want donuts now...

I absolutely want donuts. Except it's past midnight and nowhere is open. Dammit, who brought donuts into this?

When I was in college there was an all-night donut place. I don't want to talk about it.

I want to go there! Now!

I'm actually visiting the city where I went to school right now. Teleport over, and we'll donut like there's no tomorrow. Because at a 24-hour donut shop, tomorrow is a useless concept. There is only "now" and "donuts."

I believe I have attained nirvana.

When do you expect He is Worthy to be available?

Hi Pat! The release date is expected to be November 12.